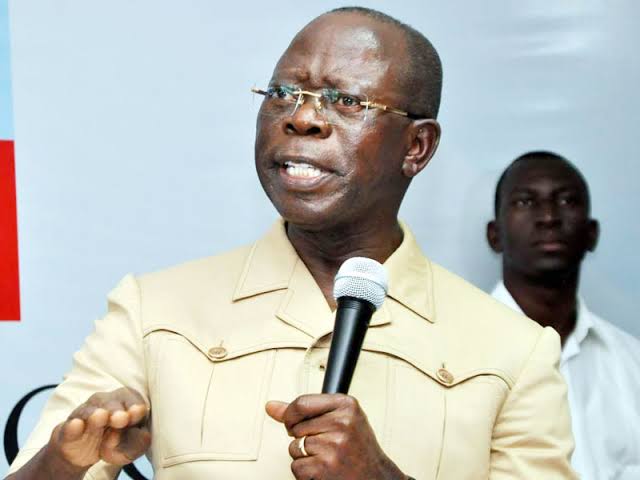 The National Chairman of the APC has denied allegations that he is responsible for the
mobilization of hoodlums to carry out an attack. The attack against Governor Obaseki happened
on Saturday during the convocation of Edo State University. Oshiomhole insists on Sunday in
Abuja that the Edo State Governor was responsible for masterminding the attack.

Oshiomhole was in attendance with his guest, which included the Chairman of Honey well
group, Mr Oba Otudeko, Oba of Lagos, and Oba Rilwan Akiolu. According to him, the intent of
the attack was just to embarrass him in his home town and make a mockery of the situation in the
media.

The IG of Police Knew About the Attack
According to the all progressive National Chairman, he was pre-informed of the attack, and he
shared it with the IGP of the Nation. He said the Inspector General of Police was aware that deputy governor had mobilized 1,000 hoodlums to the event in other to cause a commotion and also, boo him.

He’s fully aware of the import of Hoodlums to the event. Their motive was to embarrass me in
my community and celebrate it in the media that the comrade was booed and disgraced in his
own community&quot; The hoodlums were putting on all kinds of inscription, and they made it very
difficult for the lecture note to be delivered.

Oshiomole Narrates The Nature Of The Attack
“The Governor of the central bank of Nigeria was invited to deliver the lecture note. However,
after noticing the hoodlums putting on all kinds of inscriptions, he withdrew. According to him,
if those people are in the event, he won’t deliver his note. “I did not come for a political agenda
but for normal intellectual activity.&quot; We tried our best to have the lecture in a different
auditorium, but you could hear all kinds of slogan and counter slogans. The whole idea was to
have their camera waiting and then publish it in the media. As I step out, the hoodlums booed,
and they were recording it for the media so they can say Oshimole got booed.

“My guest had to leave the event as a result of the hoodlums, which was very unfortunate. I
personally invited them, so there was no way I could have organized hoodlums against them.
Therefore any idea that I organized the hoodlums is very far from the truth. I’m glad that my guest understood I was not responsible for the hoodlums, and the Edo State Government was responsible”.